Professor Samy A. Mahmoud, Chancellor of the University of Sharjah, launched on Saturday the 8th IEEE UAE Student Day Competition, hosted by the UOS College of Engineering, in the participation of the UAE Chapter of the International Institute of Electrical and Electronics Engineers (IEEE). Participating in the opening ceremony were students from 15 universities from across the UAE, in the attendance of Eng. Maryam Al Thani, Chairman of the UAE IEEE Chapter, Professor Hamid M.K. Al-Naimiy, UOS Vice Chancellor for Academic Affairs, Professor Prof. Sabah AlKass, Dean of the UOS College of Engineering, Dr. Essa Al Bastaki, former Chairman of the UAE IEEE Chapter, Prof. Mahmoud Al-Qutayri, Khalifa University Representative and Chairman of the Steering Committee, Dr. Ahmed Mufeed Al Samerai, Executive President of the Sahara Group, sponsoring the event, in addition to the Sharjah Research Academy and the College of Engineering at the University of Sharjah, and other senior officials as well as a number of faculty members and a large number of students participating in the event.

Delivering the opening address at the ceremony, Prof. Samy Mahmoud said that the UAE IEEE Chapter is the second largest chapter in the Arab world after that of Egypt, largely due to the interest of the UAE in the innovation of talented and innovative students, particularly those in the fields of Electrical and Electronics Engineering. He said that the number of universities participating in the event attests to this interest and shows support for the potential of the UAE Chapter members as well. He said that 15 of the largest universities in the UAE were participating in the event, represented by 300 students with 69 projects on display in the four-category competition, and that 65 faculty members were supervising the event, half of whom were serving as referees and the other half as organizers. 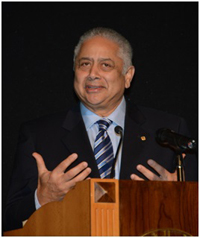 Opening the ceremony, Prof. Samy Mahmoud, Chancellor of UOS said, “IEEE has realized much global success since its establishment over 129 years ago, much of which is a result of the work of hundreds of thousands volunteer members from around the world, which is serving and will continue to serve humankind.” He said that IEEE seeks to exchange information through its human network, which includes over 430,000 members worldwide.

Talking to the students, the: “Chancellor said Each of you participating is already a winner; failure during an innovative experience is a prelude to success if coupled with persistence and determination.” He then thanked the IEEE organization, its UAE Chapter, and all who contributed to supporting and strengthening the organization at the national level. 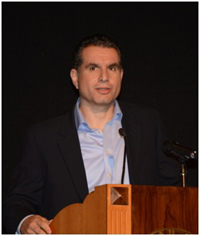 Dr. Ahmed Mufeed Al Samerai, Executive President of the Sahara Group, delivered a brief address at the ceremony, saying: “The Sahara Group views innovation and creativity as essential for the growth and development of our economy. It therefore continuously seeks out innovative youth to sponsor and help develop their talents and innovative ideas.” 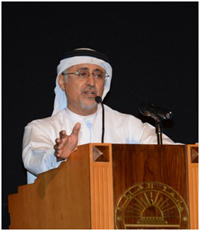 Dr. Essa Al Bastaki presented an overview of the history of IEEE and said that it is considered the world’s largest professional organization and that half of its members are students. He said that the success of the UAE Chapter as second in the region is directly related to the country’s national framework and course of direction, which emphasize global progress and advancement, and that the success of the UAE IEEE Chapter may be attributed to its focus on the innovation of students and their talents, especially in the areas of Electrical and Electronics Engineering.

He said that since the first IEEE competition seven years ago, many talented students have been discovered and encouraged to succeed, bringing international recognition to the Arab world. He said that this is not an easy road and cited the late American President John F. Kennedy, who said at the beginning of the 60”s: “We choose to go to the moon in this decade and do the other things not because they are easy, but because they are hard.” 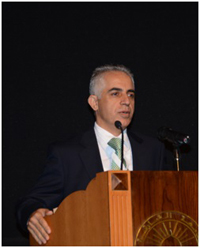 Chairman of the Steering Committee, ended the opening ceremony by sharing an overview of the efforts that went into preparing and organizing for the competition that includes four categories: “The Best three Graduation Projects; Teaching the Fundamentals of Electrical Engineering to First Year Students; Community Service Project (CSP); and Designing a Robot.